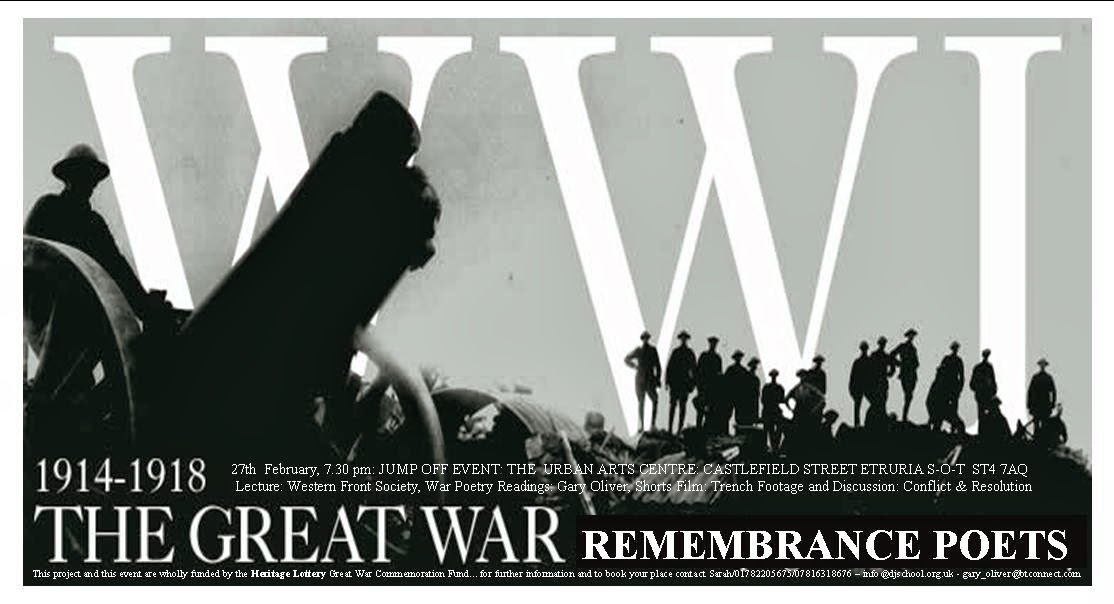 Throughout this year to commemorate the fallen of the 1914-18 war the Urban Arts Centre, DJ School, Verbal Arts and Quhwah Publications will be collaborating on a ground breaking project. The local organisations have come together with funds from the Heritage Lottery and local businesses to bring their unique and specific expertise to this very import project.


Remembrance Poets is the brain child of Gary Oliver internationally renowned local poet who found fame with his Books Woodun Indians, Dear Love Powa and Contemporary Common Criminal. Gary has worked closely with Jonathan Dale of the Western Front Society and artists attending the Urban Arts Centre in Castlefield Street, Etruria to develop this nationally import project.
The commemoration will seek to commission twelve poems from local poets for publication in a commemorative audio booklet of written and audio poems inspired by the ideas of conflict and resolution. The project is open to any poets residing in Staffordshire published or non-published. However priory will be given to difficult to reach individuals who have an interest in poetry.  ‘The idea, ’ Gary told Urban News, ‘is that  through researching the War to develop the poetry compositions we can learn about local stories from world histories and develop a wider deeper sense of enlightenment. How did the Great War influence Staffordshire and its people? Do people today know how diverse culturally, in term of people the Great War was and do they know how much it changed the world? We seek to make change locally that’s reflected nationally and vice versa. A Verbal Arts spokesman said ‘There are many stories with in the 1914-18 War that have

resonance locally and chart the influence of the conflict on the local area. We seek to bring them to the fore with this project. Jonathan Dale from the Western Front Society Midlands division said ‘it is very important that we keep the knowledge of this conflict and the memories of the fallen alive so that future generations can learn from the mistakes of the past.


To be considered for one of the twelve commissions send an example of work with contact details attached to the Urban Arts Centre and the staff at the Centre will contact you if you are successful.


Those successful in winning the commission will be mentored by professional poets and researchers with research skills, performance skills and to develop their poetic writing skills.


Also, there will be a number of public events starting with a jump off event on the 27th February, where Jonathan Dale from the Western Front Society will give a talk on the Great War and the Midlands. The event will show a film about life in the trenches with actual footage of trench life and Gary Oliver will read Wilfred Owen the celebrated war poet’s work.  Afterwards there will be a discussion about conflict and resolution 1914-2014.


If you are interested in writing poetry and wanting to put yourself forward for the commission or if you know someone who would be interested send a sample of work to:


If you are interested in attending any of the events please reserve a place on the contacts above as soon as possible as there are limited places available.
Posted by DJ School at 02:34


All our staff are educated to a high standard and fully CRB checked and insured you can received all numbers upon request.


We had a successful year in 2013 working with over 3,000 people through interactive arts intervention in direct workshops, events in the Staffordshire area. We have a new fully committed board of trustees who are pushing on into 2014 with great gusto to bring interactive social arts to people from all walks of life who will benefit from the intervention.


As you can see we have a comprehensive project package taking us into the New Year alongside our Event Kids Karnival which will be on 27th July 2014 at Etruria Park this year with an emphasis on themes surrounding happiness, healthiness and staying safe, Kids karnival will feature alongside other events planned in the city over the next 12 months.


At the start outreach project


The At the Start project bridges and fosters themes of positive thing, health lives and safety and community cohesion and intervention based social arts to develop and nurture new skills and to encourage a positive outlook on lives moving forward. Partners will be at the forefront for targeted planning for their cohort. Anyone interested in becoming a partner on this exciting new project please contact Sarah at info@djschool.org.uk.


Saturday 22nd February 2014 11.30am till 3pm celebrating 7 years at the Urban arts centre with an eclectic mix arts and performances. New learners will be able to enrol on new programmes on the day.


·       ISA- for all people who will benefit from confidence, life planning and development skills intervention –time-throughout the week via private sessions. “A personal investment in  your future”#


·       Poetry group- bring along poems to our friendly impersonal group with professional help-Wednesday’s 1.30 Till 3pm

DJ School
Stoke-on-Trent, Staffordshire, United Kingdom
The DJ School is based at the Urban Arts Centre In North Staffordshire and welcomes participants of all ages and all skills and attainments. From complete beginners and novices to those who are more familiar with DJ-ing and MC-ing, and through workshops, lessons, tutorials and ongoing support and guidance encourages students to aspire to intermediate and advanced levels.

More about donations
Every £1 helps. Really. No matter how much or how little you can afford, we can make use of it.
We are also looking for local donations of electronic music equipment (decks, mics, headphones etc) and unwanted musical instruments. Even if you have an old deck that's broken, we can use it to teach students how to repair a deck or use it for spares.

Where to find us